Poindexter plays the violin and has especially thick glasses. He starts out being shy and awkward, but through out the course of the first film he becomes more outgoing. In the first film it is suggested that he can't see well out of his glasses, which is more heavily played up in the second movie. It is also hinted that he's never had an erection until he sees the Pi's naked.

Lewis, throughout most of the movie, is the leader of the nerds. He helps Poindexter be more confident and stand up for himself.

Connie is an Omega-Mu Poindexter hangs out with at the party in the first movie. They smoke "wonder joints" and talk about weather they would want to live in the ascendance of a civilization, or during it's decline. They almost have sex before the party is ruined by the Alpha-Beta's and the Pi Delta Pi's.

Poindexter is a violinist and spends much of the movie practicing. He gets progressively better throughout the film. He tries to liven up the Tri-Lambda party by playing and he also plays in the talent contest, contributing to their win. 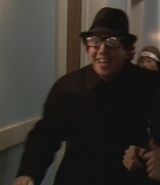 Poindexter in his Tri-Lamb jacket.