Revenge of the Nerds Wiki
Register
Don't have an account?
Sign In
Advertisement
in: Characters, Jocks, Female Characters

Betty is a cheerleader and head of the Pi Delta Pi's. During the film she is dating jock Stan Gable. At first she goes along with him in his pranks against the nerds, but as she starts to realize Stan's lack of interests in her she ends up with Lewis. In the third movie it is shown that she marries Lewis later on.

At the begining of the film Betty is dating Stan. However when she begins to relize how little he cares about her, she leaves him for Lewis. In the third film Betty and Lewis are married, and Stan attempts to win Betty back.

At first, Betty wants nothing to do with Lewis, and can't even be bothered to remember him. She helps pull pranks on him and the other Tri-Lamb's. At the homecoming carnival she refuses to kiss him at her kissing booth. She attempts to have sex with her boyfriend, Stan Gable but he refuses. Lewis takes Stan's Darth Vader mask and follows Betty, leading her to believe he's Stan and he has sex with her in an empty funhouse. When he reveals who he really is, Betty finds herself attracted to him and asks him to meet her after the pep rally. At the end of the movie she leaves Stan for Lewis and they kiss during the final scene. In the third movie they are married and she encourages him not to be ashamed of his nerd identity.

Suzy is Betty's close friend and sorority sister. They both look down on the nerds and help the jocks pull pranks on them.

Betty is a cheerleader at Adams College. 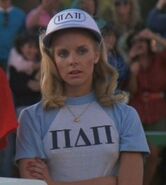