Gilbert is best friends with Lewis Skolnick and started at Adams College with him. Gilbert is a glass-half-empty kind of person in contrast to Lewis's extremely posative attitiude. Near the end of the film, and in the second movie, these roles reverse. He is nervous about college and is more aware of his nerdy-ness than the others. He is especially gifted with computers and meets his girlfriend, Judy by showing her how they work. He is shown briefly during the second appearance, as he broke his leg playing chess. In the third film, when Lewis got rid of his life as nerd and developed a brand new style, GIlbert ended his friendship with him. However, when Lewis went back to his nerdy image, Gilbert arrived at court to support Lewis on his trial. After the tri-lambs successfully won the case, Lewis and Gilbert became best friends again.

Lewis is Gilbert's best friend. They start at Adams College together. They are almost never apart, and have been doing everything together for as long as they can remember. Lewis always tries to get Gilbert to look on the bright side of things.

Judy is Gilbert's girlfriend. They meet in the computer lab, when Gilbert shows Judy how to get her computer to work. She agrees to be his date to their party and later invites her sorority sisters, the Omega-Mu's. They are also together at the end of the movie.

Flo is Gilberts mother. With the absence of Gilbert's father, he feels a certain responsibility to her, and doesn't want to leave her alone when he goes off to college.

It is hinted that the Skolnicks and the Lowes are good friends. After Mr. Skolnick wishes off Lewis, he privately talks with Gilbert saying he is sorry that Mr. Lowe passed away before he had a chance to see Gilbert enroll in the university. In the DVD commentary, the directer says that the scene where Mr. Skolnick talks to Gilbert when they first arive at Adams is a "love scene between the father and the fatherless".

Gilbert is gifted at working with computers. He chooses Adams College for it's great computer program, and meets Judy by showing off his skills on a computer. 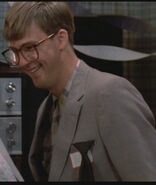