Wormser is a child prodigy who is allowed to start college early. At first he doesn't want to go and would rather be around kids his own age. Later on he warms up to college life with much help from the Lambda Lambda Lambda's.

An insinuated sub-text in the film is the nerds feeling protective of Wormser. Whenever the Tri-Lamb's leave the house, someone almost always has an arm around him, or a hand on his shoulder, usially Gilbert or Booger, who can even be seen lifting him up in the final shot. However with that said, they also don't exclude Wormser from the more adult activities, such as the panty raid.

Out of all the Tri-Lamb's Lamar is defenetly the closest to Wormser. While the other nerds don't mind Wormser spying on the Pi's with them, Lamar is the only one who shows concern. They also work out together at one point, and they both breakdance at the talent show.

Mr. and Mrs. Wormser are Harold Wormser's parents. They want him to go to college since he was accepted, despite Wormser's reluctance. They drop him off at Adams but don't stay long because Mr. Wormser has a business meeting.

His specialty is aero-dynamics, but after he found it was getting too easy he tranfered to computers, and now aero-dynamics is just a hobby. His expertise in this area helps the Tri-Lambda's win the javaline throw. In the second movie he is shown to have a talent for making fake ID's. In the third film it is revealed he becomes a gynecologist. 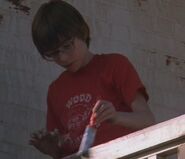 Wormser in his Tri-Lamb jacket. 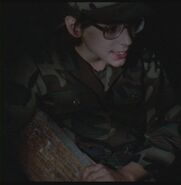 Wormser in the TV Pilot.