Revenge of the Nerds Wiki
Register
Don't have an account?
Sign In
Advertisement
in: Characters, Jocks, Male Characters, Nerds

Stan Gable is a jock and the main antagonist in the first film (although he converts to protagonist by the third film). He can't stand nerds and thinks they are a threat to his way of life. He is also dating Betty Childs until she leaves him for Lewis Skolnick. In the third movie, he becomes dean of Adams College and admits that he has always felt like a nerd. Also, he joins the nerds--even getting romantically involved with one.

Betty and Stan are dating at the begining of the film, but Betty ends up leaving him for Lewis. In the third film Lewis and Betty are married and Stan attempts to win her back.

Danny is Stan's best friend. They spend most of the film partying, playing football and terrorizing the nerds.

Stan hates Lewis because he is a nerd. He and the other jocks do whatever they can to bring them down. Stan even belives that the nerds are a threat to their way of life. At the end of the first film, Stan's girlfriend Betty leaves him for Lewis. In the third film Stan tricks Lewis so that he can get close to Betty and try and win her back. Or rather just get back at Lewis.

She is the one who notices that now Stan's face is breaking out now that Stan has converted to a nerd. While sick with chicken-pox, he watches the bachelor party with her on the Skolnick camera-vision cam-goggles. Feeling left out, she makes love with him.

Stan's talents are mainly athletic. He is on the football team, having been a two-time All American quarterback, and also proves himself to be a gifted javelin thrower during the homecoming carnival. In the third film he becomes dean of Adams College, succeeding a retired Dean Ulich. In the fourth film Stan seems to have resigned his deanship in order to take a job as a computer software salesman, and now wears glasses similar to Lewis, suggesting he now has a eye problem like astigmatism or farsightedness.

He gets romantically involved with fellow nerd Judy. The two make love in the bed while Stan has acquired chicken pox. 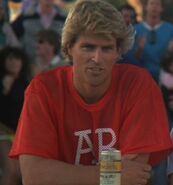