Takashi is a Japanese nerd with a thick accent. He is unaware as to what a nerd even is at the beginning of the film, let alone the fact that he is one. Throughout the first film he can be seen playing poker with Booger, constantly being swindled. Booger, however, redeems himself by explaining to Takashi what a "hair pie" is, changing his life forever.

Booger and Takashi hang out mostly together for the majority of the film. They play cards, as Booger tricks him into losing.

He spends alot of the first film playing poker. He wins the beer chugging trycicle race in the carnival after taking "trichloromethylene" to counter all effects of alcohol on the system. After numerous laps, where he was required to chug a beer at the pit stop for each lap, he was asked how he's doing, to which he replies "Fucking great!". He also plays the gong during the talent show. 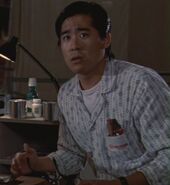 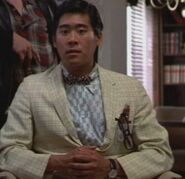 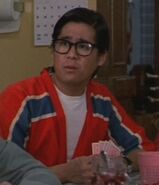 Takashi on "Robot Chicken".
Revenge of the Nerds Cover by ROUGETB.jpg
Takashi by ROUGTB